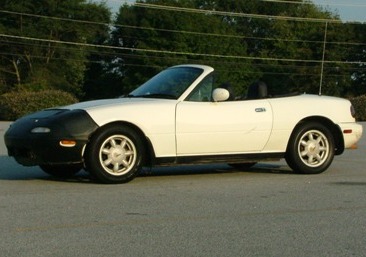 The Mazda Miata as it looked in September of 2005

In 2005 my father, Dick Hoyt passed away. He was 94, and led an active life right up until the very end. One of the items I purchased from his estate was a 1991 Mazda Miata.

As a younger man, my father raced MGs, Jaguars, Austin Healeys and anything else that had wheels on it. He competed in time trials, slaloms, hill climbs, and rally events. He drove, and my mother (Violet) was his pit crew. At some point, he had to grow up and concentrate on a career and a family, leaving behind his love of racing and sports cars. One of his careers was that of a police officer, which he did for many years. And during that career, he was able to enjoy sports cars again, because he purchased for himself, an Olds 442, which he used as his police vehicle! (It was a small town and he was the only officer, and he owned his own car).

Flash forward to the ’90s and dad was in his golden, or maybe platinum years. He was traveling the country in a big RV and he needed a vehicle to tow behind it. Wanting something small, he located a Miata. It was a well taken care of vehicle, obviously loved by the former owner. It reminded him of the cars he had raced. Small and quick. So he bought it and proceeded to have a tow bar welded to it and wiring for lights added. Then the car became his “dingy”, being dragged all over the place. It led a pretty simple life. He would hitch it up at his home in Fayetteville Arkansas and drag it to one coast or another, unhooking it at stops along the way. The car shows 189,000 on the odometer, but it is my belief that the large majority of them were never under its own power.

The mechanical wear and tear was reduced, but the body suffered. Rocks and other debris were constantly pelting the car, and more than once it went off-roading as dad would back the RV up and the car would go in a ditch or even into another car. To make matters worse, Dad lived down a long dirt road, where the car received a beating when he would drive it. That’s not the worst of it though… Sometime in about 2002, there was a storm at his home, and golf ball to baseball sized hail came down… The end result – The car looked like the surface of a golf ball itself. The insurance company totaled it! Dad bought the salvaged vehicle and continued to enjoy it, as ugly as it was.

On September 5th, Labor Day, 2005, my father died suddenly, at 94 years old. I returned to my childhood home and after the funeral and the family gatherings, I returned to mine in South Carolina, the new owner of the Miata my dad loved so much. 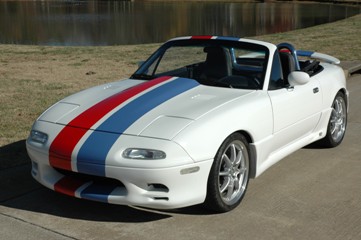 Re-in-CAR-nation. Oh my, I crack me up. Okay, sorry. Anyway, on with the story. After acquiring the vehicle, I quickly realized that it was absolutely no match for the 1992 Toyota MR2 Turbo that it replaced. It did not look as nice, it did not handle as nice, and it certainly didn’t have the power. It was wimpy! It was – ahem, girly! But it was dad’s and now I was stuck with it.

Time to make some improvements…

Keep in mind, I am not a Japanese car kind of person, I much prefer the vehicles of my past, Italian vehicles, but, again, this wasn’t one of those. So let’s make the most of it.

I determined that in order for me to be able to love this car, it was going to require undoing the damage first. The body had been beaten with an ugly stick. I went to work on it to cover up the problems. (That was a mistake I would pay for later) After spending a hundred hours on fixing fenders and a hood that was damaged from hail, I opted to replace them! I bought two new replacement fenders, a new Jay Simpson cowl induction hood, front and rear bumper panels and lower side skirts from Racing Beat, and a rear spoiler. Other items of interest: Clear lenses, 18 inch rims and tires, chrome roll bar, momo steering wheel etc.

All those things only served to make it uglier. Now it was primered and slapped together. I needed help… Boy did I need help! I found it with the crew at Caroline Collision Center.

They were not happy at the previous body work. As mentioned before, Dad had several encounters with movable and immovable objects, and the paint had peeled more than once. Dad was a frugal man – okay, he was cheap. He had it repainted, one quarter at a time as he would damage it. And at one point, he had the whole car mostly repainted. But not quality jobs, they painted over paint, they painted over everything!

CCC also had my repairs to deal with… I had put body filler on the smaller dents and tried to work the larger ones. I had put on body panels and they were not aligned well, and I had shot primer and then some color as a guide coat to see how great my work looked. CCC’s techs stripped it, they stripped it all… Layers of ugly were stripped away to the factory sealer coat and bare metal…

In the photo archive, you will find that the vehicle was total stripped. Every removable panel on it was removed. They worked them, then refitted them, then taped the stripes you see on it, then removed the panels again, then painted them, and reinstalled them…

The whole process took about two months and they put up with me stopping in almost every day with a camera and taking pictures.

Some other things I had them do were to remove the antenna (shave it) and weld over it, remove the Racing Beat logos, and all badges. The holes left behind were glassed in from behind, with no body filler. In fact, the car has very very little body filler on it, if any. All those dents were worked out, the bottom of the trunk deck is so smooth you can’t tell they were there. The side skirts from Racing Beat were fixed to the car with the same material that holds Vettes together, not just glassed on or pop riveted and “bondo’d” over.

The Jay Simpson cowl hood was modified at the hinge points because it was developing stress cracks. The CCC tech ground down the ‘glass and reinforced it for me. They also mounted multiple adjustable bumpers so the hood lays as flat and stable as the original.

CCC also installed a new Stage II clutch for me, and new AGX 8 way adjustable struts and springs. They did it all! I will try to post a short progressive slide show as time is available.

I would like to thank everyone at CCC for working with me and more importantly, putting up with me!

The full archive of restoration photos may be found here:
www.hoyts.org/miata/images

A few toys courtesy of DDM Works, such as a supercharger and cold air intake system give this little car the power it deserves!

In 2009 electro-luminescent gauges faces were installed (white in daylight).

What’s next? Glad you asked…

(In no particular order)